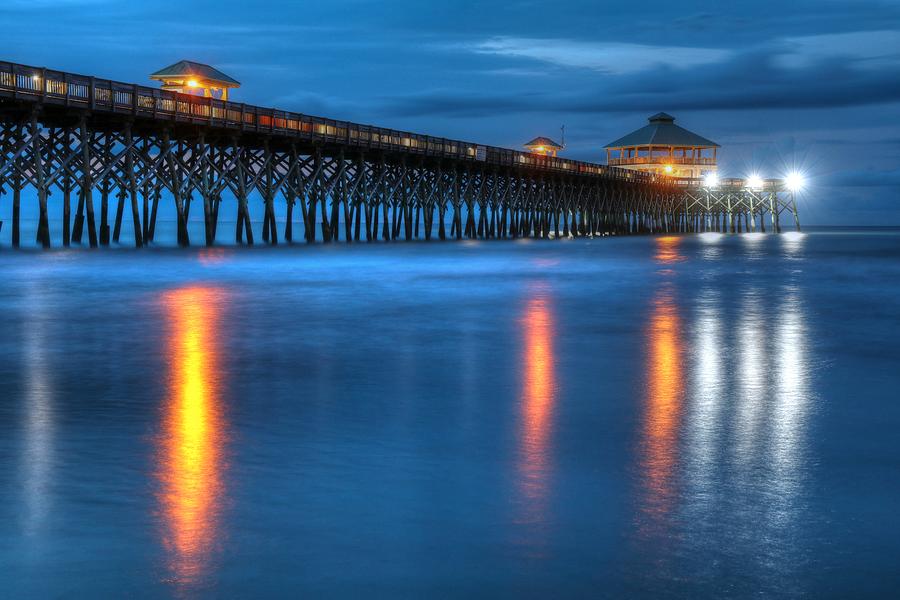 The Edwin S. Taylor Folly Beach Fishing Pier is 24 feet wide, extends more than 1,045 feet into the Atlantic Ocean, and is 23 feet above sea level. Known as one of the best places to go saltwater fishing in Charleston, visitors and locals also take advantage of the miles of Folly Beach views, bird watching, and walking. Check out one of the best views of the �Edge of America� from the Folly Beach Pier.\"

\"The blue hour (from La hora azul, in Spanish, or L\'Heure Bleue in French) is the period of twilight early in the dawn each morning and late dusk each evening when the sun is at a significant distance below the horizon and the residual, indirect sunlight takes on a predominantly blue hue. This effect is caused by the relative diffusibility of short blue wavelengths of light versus the longer red wavelengths. During the blue \"hour\" (typically the period is about 40 minutes in length), red light passes straight into space while blue light is scattered in the atmosphere and therefore reaches the earth\'s surface. Because of the quality of the light, this period is treasured by artists.\"

WOW! This is awesome! We were there in the middle of a blah day. Def going back--love the area!