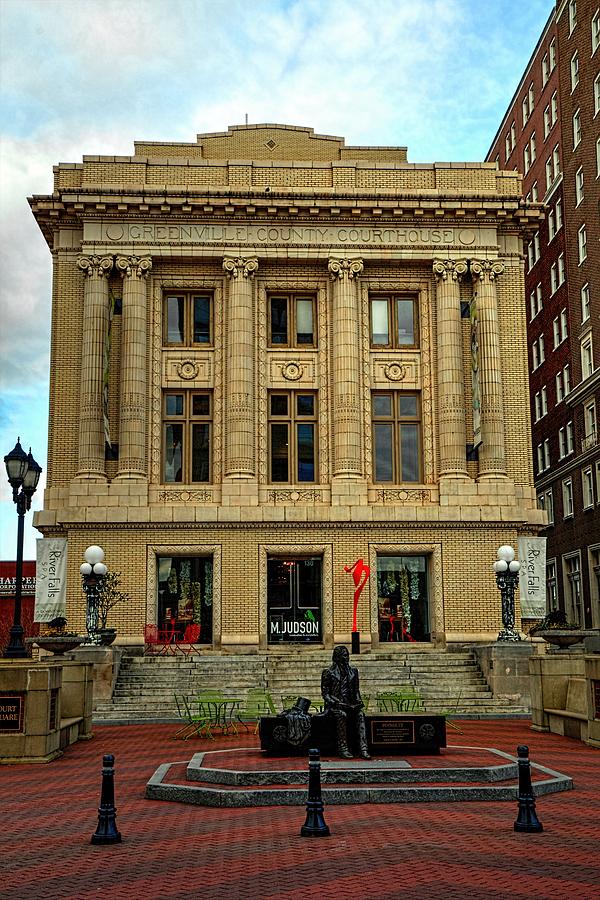 "The Greenville County Courthouse, the fourth building employed in this capacity, is significant as an example of early twentieth century public architecture on a monumental scale in the piedmont South, for the high quality of its design and construction, and for its association with a prominent architect, and is also important to the history of Greenville and Greenville County as the seat of law and local government. The primary architect was Georgia architect Phillip Thornton Marye. The supervising architect for the building was H. Olin Jones; J.A. Jones of Charlotte was the contractor. The courthouse is the only existing public Beaux Arts style building in Greenville County. The building is divided into two sections. The eastern section faces Main Street and is three stories in height; each story is 3900 feet in area. Behind it lies an eight-story tower; each story is 2600 square feet in area. A concrete structure with exterior walls of cream colored brick, the building is ornamented with terra cotta trim and details which are representative of the era and the Beaux Arts style. The building served as the courthouse for Greenville County until 1950 when the court was moved to a new building. The Family Court of Greenville County was located then in the building and remained there until 1991. Listed in the National Register April 7, 1994."

Oh It is wonderful!!

I vote for the color version of this. Both are great. Well done. Love the red, red, bricks. Carol. FAV

Wonderful capture of the buliding and colors in this image!