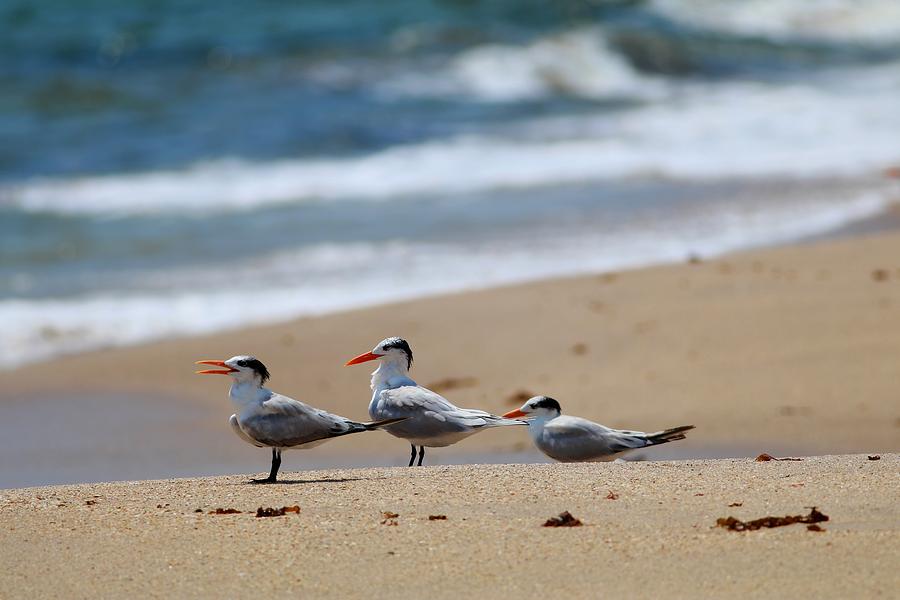 Winds blow, surf goes in and out, royal terns hangout!

"The Royal Tern makes its nest scrape on the ground on low-lying islands. The pair defecates directly on the nest rim, perhaps to reinforce the nest against flooding. After a few weeks, the nest rim hardens.
Young Royal Terns leave the nest scrape within one day after hatching and congregate together in a group known as a crache. Eventually, all of the chicks in a colony come to the creche, which can have thousands of chicks ranging in age from two to 35 days old. A pair of Royal Terns will feed only their own chick, and manage to find it in the crowd, probably by recognizing its call.
The oldest recorded Royal tern was at least 30 years, 6 months old when it was found in Belize in 2013. It had been banded in North Carolina in 1983."
https://www.allaboutbirds.org/guide/Royal_Tern/lifehistory

Wonderful capture and depth of field!

Great capture of these beach birds!

Thank you Karen Silvestri for the feature in the group"Lady Photographers and Artists!"

Thank you Alice Gipson for the feature in the group "Florida Scenic Photography"!

Hi Carol! This royally good capture has been featured by Wild Birds Of The World. L/F

Thank you William Tasker for a feature in the group Wild Birds Of The World!

Love your beautiful use of depth of field!

Sometimes it's a simple photo that is so compelling and this is one!

Love this! They look like they are having a fun day at the beach!