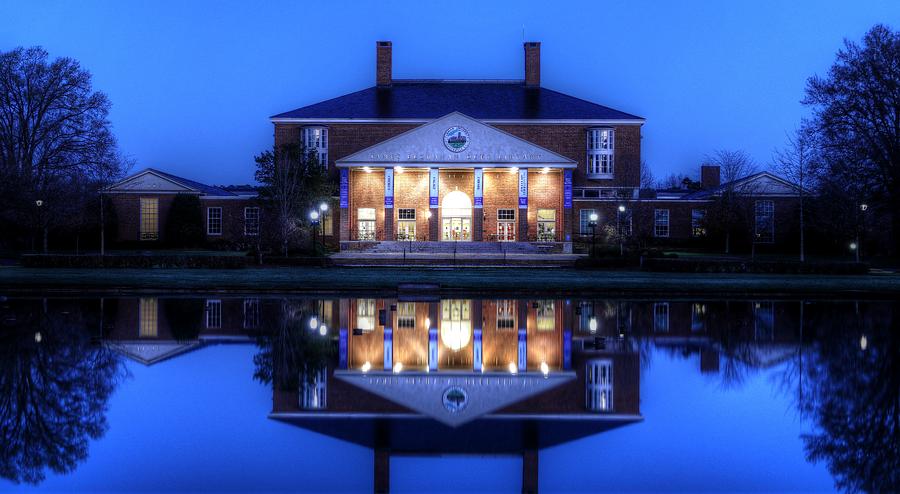 Photography was taken in winter during the blue hour.

"On April 24, 1956, the cornerstone of the James Buchanan Duke Library was ceremoniously placed. Although this structure was a pioneer on the new Furman University campus, the university library had more than a century of history and more than a hundred benefactors upon which to build.

The South Carolina Baptist Convention established rules in 1826 to govern The Furman Academy and Theological Institution. The Board of Agents of the Convention was instructed to "take immediate measures for collecting a Library" and periodically, to enlarge the collection. The library was allotted 10% of the total expenditure for the fledgling institution. In 1830, there were 620 volumes, most of which had been donated by individuals or the defunct Roberts Academy, a private school for ministers. In the same year, the Convention also recommended the establishment of archives for essential Furman Academy records and noteworthy documents of the Baptist denomination. Three years later, including the personal libraries of professors, the collection had more than doubled.

The Furman Academy moved once after three years and relocated again before the decade ended. Each time the Academy moved (from Edgefield to High Hills of Santee to Winnsboro to downtown Greenville and finally, to its current site), the books were carried to their new location. In 1850, when the Convention decided to move The Furman Academy and Theological Institution to Greenville, it also acquired a new name, The Furman University. Unfortunately, the University did not have much time to enjoy its idyllic new setting and celebrate academic accomplishments. The Civil War erupted in 1861 and Furman and its library closed from 1862-1865. It took a generation for the University to recover from the impoverishment, destruction, and lack of support for liberal arts education.

In the early years, there was one room in an academic building for library materials, but there was a brief period in which the library was located in a professor's home. By 1890, however, there was a Reading Room and a Library room in the main academic building, as well as independent libraries created by student societies. There was not a professional librarian responsible for the collection at this point, but a group of elected faculty members served as the Library Committee. This policy changed in 1902 when a Librarian was elected by the faculty. The first individual to be inducted was Nannie Louise Harrison, secretary to President E.M. Poteat."

Check out the full history of Furman University
https://libguides.furman.edu/library/history

Congratulations on your recent sale.

Congratulations on your sale!

Congratulations on your latest sale Carol! :)

Congratulations on your sale!

nice and congrats for the sale!

Thank you to the buyer from Leland, NC!!!

Thanks to the remarkable composition, it look like a definition of library: a place where the past and the future meet.